If you are unhappy with a service or the help your child is getting, you should speak with someone as soon as possible.

Browse through our dropdowns below which take you through the various options of how to raise your concerns.

You may also be interested in attending our workshop 'Making Meetings Matter' which offers practical advice and the opportunity to meet other parents and share good practice.

See our news and events page for details of available workshops. 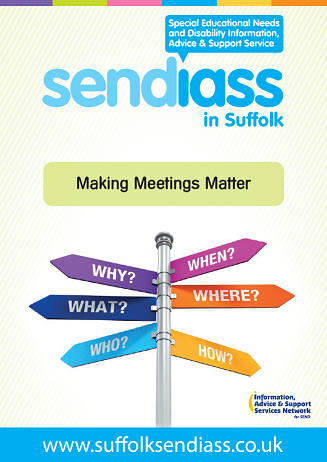 For concerns about support in school

The first thing you should do if your are unhappy about the help your child receives is speak to a member of staff at the setting, for example:

You will likely need to arrange a meeting so you have time to discuss your concerns.

Read our leaflet 'Making Meetings Matter' (PDF) for how to get the best out of your meeting.

For concerns about SEN services provided by the local authority

You can contact the Family Services Team in the first instance to explain your concerns. You can ask to speak with a manager, we have a few key names on our helpful contacts leaflet (PDF).

Raising your concerns in writing...

Making a formal complaint to an education setting

If discussing your concerns has not reassured you, you could:

Look at the setting's own website for details about their complaints procedure.

For academies (and free schools) if you are unhappy with the outcome of your complaint, you may be able to complain to the Education Skills & Funding Agency.

Read the Government guidance around complaining about a school.

Complaining to the local authority

You cannot complain to the local authority about an academy or free school. You can find the complaints procedure for the school on their website. If you are unhappy with the outcome, you may be able to complain to the Education Skills & Funding Agency.

You can complain to the local authority about a service, or if you believe a policy has been applied unfairly.

General concerns about SEN/Inclusion in a school

If you have more general concerns about SEN or Inclusion in a school you could contact the Inclusion Consultant for Suffolk:

Where there is an EHC plan

If you are unhappy with the provision your child is receiving, or the provision in their plan is not being provided, you can contact the Family Services Team to raise your concerns. If you are unsatisfied with their response you could lodge a formal complaint.

Appealing to the SEND Tribunal

The Local Government and Social Care Ombudsman, which considers complaints about local authorities, has temporarily suspended its central phone line and online complaint submission form from 18 March 2020. New complaints will not be accepted until further notice.

They have also said that the progress of existing cases may be limited. However, if you have already registered a complaint, they may continue to work on it and make email and telephone extensions of individual staff available.

If you have followed the local authority complaints procedure and are still dissatisfied, you can complain to the Local Government and Social Care Ombudsman about:

You can only complain about something that the Local Authority has done wrong, or failed to do, that directly affected you/your child. This is known as 'maladministration'. They will not get involved where you simply disagree with the action that has been taken by the Local Authority or school.

Examples of 'maladministration' include:

Possible outcomes (if your complaint is upheld) might be asking the local authority to...

Read more about complaining to the LG&SCO

Disagreement resolution services are available for any issue relating to SEND, provided all parties agree to participate.
You can request SEND mediation (where you disagree with a local authority decision around an Education, Health and Care plan). The local authority must participate within 30 days of being notified by the provider (Anglia Care Trust).
Read more about SEND mediation and disagreement resolution services
Download the Anglia Care Trust leaflet (PDF)

Appealing to the SEND Tribunal service about an Education, Health and Care (EHC) plan

You can appeal these local authority decisions...

... but you must firstly consider mediation.

Read our information about appealing to the SEND Tribunal Service

Special Needs Jungle have a flowchart (opens PDF) explaining what you can do if you disagree with the local authority.

Nurseries, Schools and Colleges must take steps to ensure disabled children and young people are not substantially disadvantaged due to their disability. 'Reasonable adjustments' is the term used to describe these in law.

The SEND Code of Practice summarises the Equality Act duty and says Nurseries, Schools and Colleges must:

If you feel your disabled child has been discriminated against (within the last six months you could consider complaining to the SEND Tribunal.

As this is a formal legal route, it is strongly advisable to seek legal representation if you are considering this option.

You can ask a court (within three months) to consider whether the action taken by the local authority was made in a lawful, fair and reasonable manner and a few possible examples might be:

Find out about how to apply to court for Judicial Review.

IPSEA have some useful information about the process.

Ofsted will not handle individual complaints about a school, however it may be possible to let them know about general concerns you have.

When a school your child attends has a visit from Ofsted, you will have an opportunity to share your views confidentially, known as 'parent view'.

Read more about what you can raise with Ofsted.

Complain about a school or childminder - Government guidance

For more general concerns about SEN or Inclusion in a school you can contact:

unofficialexclusions@suffolk.gov.uk - to notify the local authority about unofficial exclusions (asking parents to pick up child early or at lunch, sending home to cool off without issuing a formal exclusion).

Complain to the SEND Tribunal about Disability Discrimination